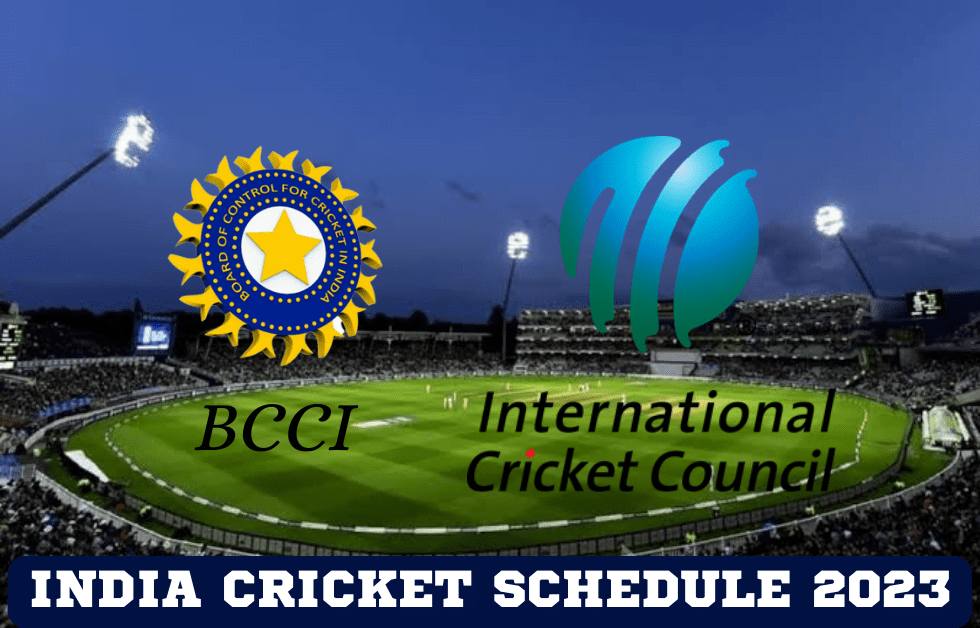 Cricket calendar for India (India Cricket Schedule 2023 – full list of Test, ODI and T20I) for 2023 is ready as per schedule.

Sri Lanka, New Zealand and Australia cricket team will tour of India and the Indian team is will tour of West Indies and South Africa.

Also, with two big important events (Asian Cup & ICC Men’s Cricket ODI World Cup) are going to happen at the Mid-end of the year, which are going to take place on Asian continental pitches.

So Indian players have a good chance to make their place in the team for the important event and prove their worth for the team.

Season 2022 did not turned out very well for the Indian team in some important events. India got disappointed in Asia Cup and T20 World Cup and after that India also faced defeat from New Zealand and Bangladesh.

The Indian team has very good chances in 2023 where they can beat the opposition team in bilateral matches and in two important events going to be held in 2023 Asia Cup and ODI Men’s World Cup matches, Indian players will be able to prove their selection to the opposition.  they can prove their worth by performing well in the matches.

Pakistan in the Asia Cup and India alone hosting the ODI Men’s World Cup 2023, so India has a very good opportunity to take advantage of the experience of playing in Asia continental and on their home ground and these two big events Asia Cup  And take big title like world cup in your name

India will start its second limited over series with New Zealand. Where New Zealand will tour India and in this series also 6 matches will be played in total.

India’s final Test before the historic tournament (the ICC Men’s Test World Championship 2021–2023) will be the Test match series against Australia with the first match starting on 9th February in Nagpur and the last match ending on 13th March.

And this bilateral series is also going to be hosted by India and there will be 4 Tests and 3 ODIs between these two teams.

India’s cricket festival is played every year and the world’s costliest cricket event IPL 2023 will be played between March and May. A total of 73 matches will be played in IPL.

India will tour West Indies in July-August 2023. India will play all three formats of cricket in West Indies where 2 Tests, 2 ODIs and 3 T20 matches will be played between the two teams.

However, this visit of the Indian team is still completely doubtful whether India will go to play Asia Cup in Pakistan or not. BCCI Secretary and Asian Cricket Council President Mr. Jay Shah has urged the ICC to shift the tournament from Pakistan to some other place.

After 2011, the ICC Men’s Cricket World Cup is going to be held in India but this time the World Cup will be different for India.

This will be the first time in the history of the World Cup that India will host all the matches of the Men’s ODI World Cup on its own.

This is a golden opportunity for India and India will try its best to win the World Cup by taking full advantage of the conditions of its home ground.

The schedule of World Cup matches has not been released yet, it is expected that ICC will release the schedule soon.

Australia tour of India will continue after the World Cup and during this time, Australia will play 5 T20 matches with India.

On this tour, India will play two Tests, three ODIs and T20 matches against South Africa.

We hope that 2023 turns out to be a great year for Indian cricket as two big events are going to happen in Asian conditions this year and winning this event is a huge achievement.