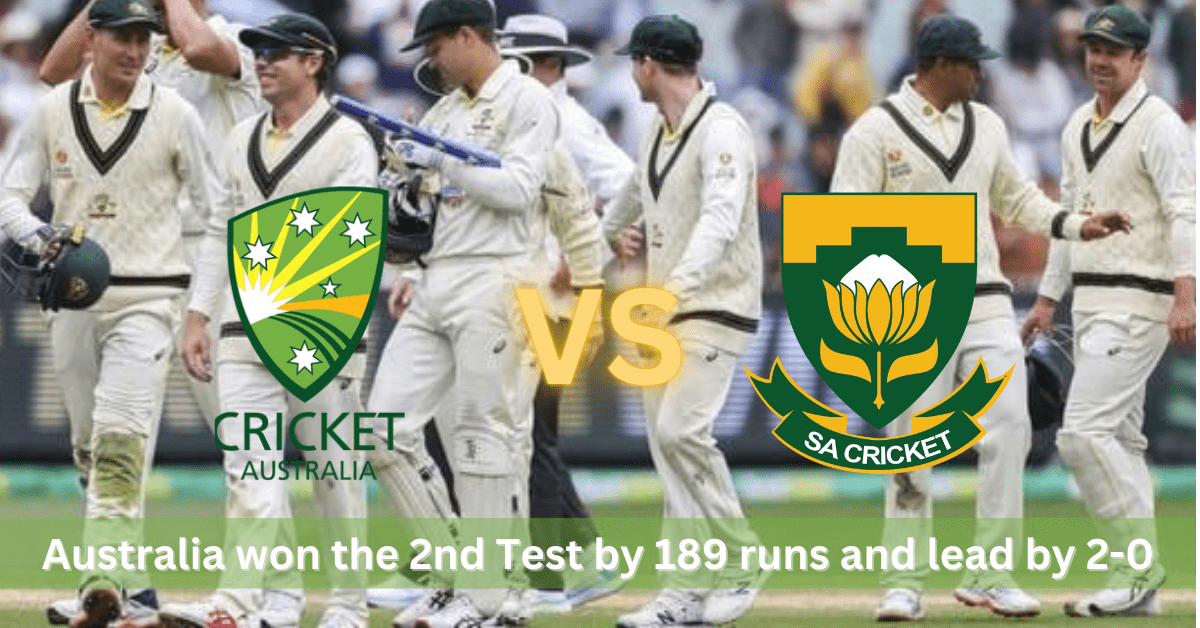 Australia has defeated South Africa by a huge margin of an innings and 182 runs in the ongoing third test match, at Melbourne Cricket Ground in Australia.

Australian bowlers dominated the fourth day of the match as well. When South Africa came out to bat, its score was 1 for 15, but its wickets kept falling at regular intervals. Temba Bavuma scored 65, Kyle Verreynne 33 and Theunis de Bruyn scored 28 runs for South Africa.

In this way, Australia all out South Africa for 204 runs and won the match by an innings and 189 runs.

Thus Australia has won the three test series by 2-0. Although the third match is yet to be played.

AUS vs SA 2nd Test Match – Man of the Match

The man of the match award was given to David Warner for his individual score of 200 runs.

When South Africa came out to bat on the first day of the match, they got a bad start, their first wicket fell on the score of 29 runs.

None of the South African batsmen were able to play fiercely. The only partnership made between wicketkeeper batsman Kyle Verreynne and Marco Jansen, the team’s score crossed hundred and fifty runs but after both were dismissed, no batsman could play and the entire Proteas team was all out for 189 runs. Jensen and Varreynne scored the most runs for South Africa, both scored 59 and 52 respectively.

All the bowlers performed well for Australia, Cameron Green took the maximum 5 wickets, while Mitchell Starc got two wickets, Nathan Lyon and Boland got one wicket each.

Anrich Nortje took 3 wickets and Kagiso Rabada got 2 wickets. Lungi Ngidi and Marco Jansen got one wicket each.

After declaration of Australia’s innings, South Africa comes to start thier 2nd innings.

But in the second over of the match, Dean Elgar was caught behind the wicket of Pet Cummins. Wicketkeeper Alex Carey caught his catch and South Africa’s first wicket fell in the form of Dean Elgar for zero runs (Zero run Individual and team score). And at the end of the third day, South Africa’s score was one wicket for 15.

None of the African batsmen were able to bat with the exception of Temba Bavuma’s 65-run knock and wicket-keeper batsman Kyle Verrenne’s contribution of 33 runs.

Most wickets were taken by Nathan Lyon, he took 3 wickets, Scott Boland took 2 wickets. The same Mitchell Starc Patcummins and Steve Smith have taken one wicket each.

Although Australia has won the match, but the injury of the players has become a headache for the team management. In the second Test, 3 players of the Australia team were injured.

With this victory, Australia has now won the Test series 2–0 and has taken an unassailable lead. Now he has a good chance to test his bench strength in the third test.