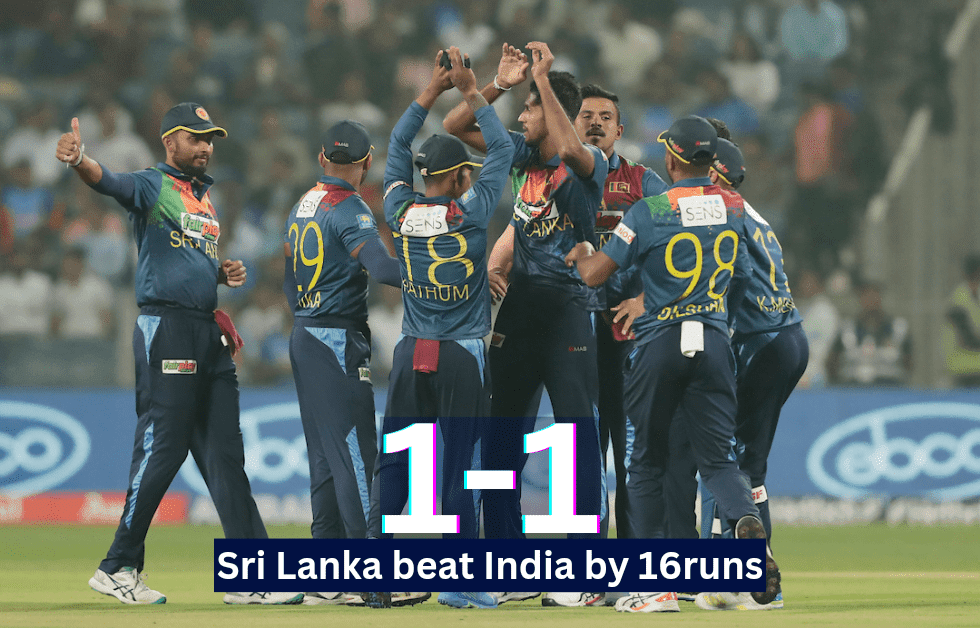 In the second T20 match between India and Sri Lanka at the Maharashtra Cricket Association Stadium in Pune, Sri Lanka scored a huge score of 206 runs for 6 wickets in 20 overs.

In response, India could only score 190 runs for 8 wickets in 20 overs and lost the match by 16 runs and leveled the three-match series 1-1.

This is the first time in the last 8 years that Sri Lanka has defeated India in a T20 match at its home ground.

Captain Dasun Shanaka, who performed all-round in the match, was awarded the Player of the match award. Captain Shanaka scored a blistering 56 runs and took 2 wickets in bowling.

In the second T20 match between India and Sri Lanka, India won the toss and decided to bowl first but India’s decision proved completely wrong.

The opening pair of Pathum Nissanka and Kushal Mendis took full advantage of the power play and scored 19 runs in the second over of the match.

Arshdeep Singh came to the ground today after fever, but apart from his bowling, it seemed that he is not fully fit yet, today he did 3 consecutive nobels in his first over and gave away 19 runs.

Kushal Mendis completed his 50 runs before getting out and scored 52 runs in 31 balls before being dismissed lbw by Yuzvendra Chahal.

Yuzvendra Chahal dismissed Kusal Mendis LBW on his first and third ball, although the field umpire declared not out, but Yuzvendra Chahal sought the help of the third umpire, where he got success.

India got their first breakthrough in the eighth over and in the very next over, Umran Malik bowled Bhanuka Rajapaksa.

But the Sri Lankan batsmen were not stopping even then as Pathum Nissanka and left-handed batsman Aslanka continued to thrash the Indian bowlers and rained square sixes around the ground.

Captain Dasun Shanaka, who came after this, thrashed the Indian bowlers in such a way that it seemed as if street children were bowling in front of him.

Shanaka did not get out till the last over and he played a brilliant inning of 56 runs in 22 balls and hit 2 fours and a brilliant 6 sixes in his innings.

Shanaka Made a Record: Scored The Fastest Half-Century

Sri Lankan Captain batter Shanaka scored 50 runs in 20 balls to become the fastest Sri Lankan batsman to score a century, before which Mahila Jayawardene and Kumar Sangakkara scored a century in 21 balls.

No bowler would prove to be effective from India. Only Yujvender Chahal got 1 wicket, Axar Patel 2 and Umran Malik got 3 wickets.

But in terms of giving runs, everyone was ahead. Arshdeep Singh gave 37 runs in just 2 overs, while Umran Malik gave 48 runs, Shivam Mavi gave 53 runs.

India did not start well. Indian opening batter Ishaan Kishan was bowled by Rajith in the first ball of the second over of the match.

On the last ball of the same over, Shubman Gill also could not understand a slower ball and was caught at mid-off.

Rajat dismissed both Ishaan Kishan and Shubh Mangal in his very first over and sent them back to the pavilion.

The process of falling Indian wickets did not stop here, Rahul Tripathi also went to the pavilion after catching the wicketkeeper on the first ball of 3rd over.

And thus India’s score became 3 wickets for 21 runs in 3.1 over. Captain Hardik Pandya and vice-captain Suryakumar Yadav were present at the crease as India’s strongest pair after the fall of three wickets.

But nothing was going well for India today and on the fourth ball of the fifth over, Hardik Pandya also returned to the pavilion by giving a catch to the wicketkeeper.

The Indian team could only manage 39 runs in the first six overs of the power play and had lost four wickets. But then Suryakumar Yadav shared a vital partnership of 91 runs with Akshar Patel who came after him.

Suryakumar was caught by Hasaranga in the process of scoring fast runs on the ball of Dilshaan Madhushanka.

Shivam Mavi, who came after, also played good shots and tried hard to take the team to the target, but in the death over, the Sri Lankan bowlers bowled well and stopped the Indian team by 16 runs.

The Indian team could only score 190 runs in the allotted 20 overs, Akshar Patel scored a blistering 65 while Shivam Mavi contributed 26 runs.

Apart from Mahesh Dakshina, all the bowlers took wickets from Sri Lanka side. Madhushanka, Rajitha and captain Shanaka got two wickets each and Karunaratne and Hasaranga got one wicket each.

After winning this match, Sri Lanka has come 1-1 in this series. Now, it will be exciting to see who wins the final match and this series.