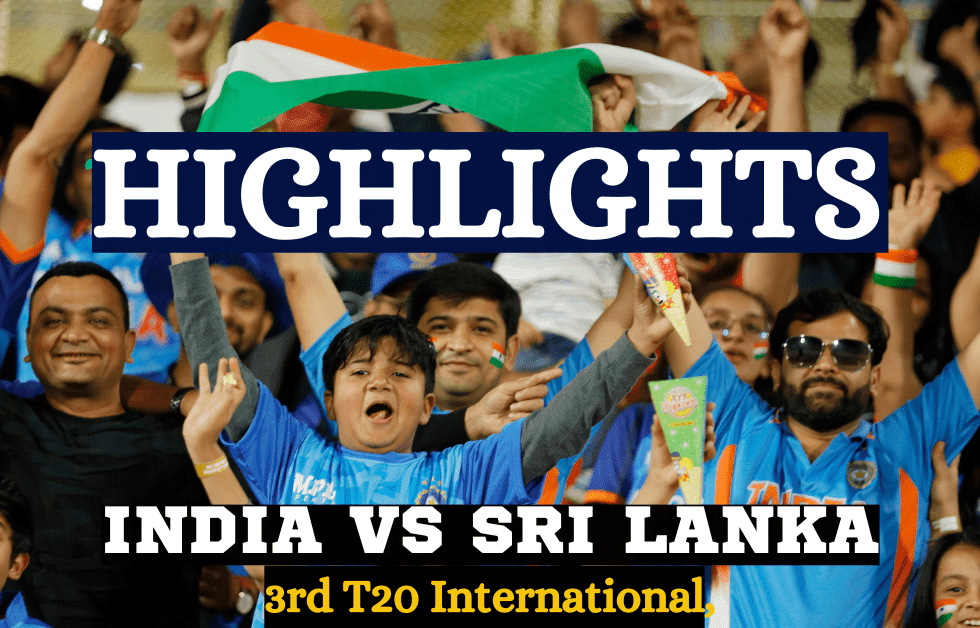 IND vs SL 3rd T20 Match: India defeated Sri Lanka by 91 runs in the third and deciding T20 match at the Saurashtra Cricket Stadium in Rajkot.

India defeated Sri Lanka by 91 runs in the third and deciding T20 match to take the series 2-1.

Earlier, India won the first match in Mumbai while Sri Lanka won the second match in Pune to draw the series 1-1.

In the third and deciding T20 match played in Rajkot, India won the toss and decided to bat first and set a huge target of 229 runs in the stipulated 20 overs.

Sri Lanka, chasing 229, could only manage 137 runs in 16.4 overs and were all out. Captain Shanaka and Kusal Mendis scored 23–23 runs for Sri Lanka while Dhananjay D’Silva contributed 22 runs.

IND vs SL 3rd T20 Match: Player of the Match and Series

Centurion Suryakumar Yadav, who scored a century for India, was awarded the player of the Match.

Akshar Patel was awarded the player of the Series for his all-round performance.

Electing to bat first after winning the toss, India did not have a good start; India’s first wicket was dismissed on the fourth ball in the very first over. Opening batter Ishan Kishan was caught out by Madhu Shankar.

But after that out-of-form Shubhman Gill and Rahul Tripathi took the lead and started thrashing the Sri Lankan bowlers.

Taking advantage of the powerplay, Rahul Tripathi scored quick runs and before getting out, the team scored 53 runs in 6 overs.

Rahul Tripathi was dismissed after scoring 35 runs in 16 balls which included his 5 fours and 2 sixes.

Shubhman Gill shared a 111-run partnership with Surya Kumar and contributed 46 runs in 36 balls for the team before getting dismissed, he also hit 2 fours and three brilliant sixes in his innings.

After the dismissal of Shubman Gill, Captain Hardik Pandya came on the field but got out after scoring only 4 runs. Similarly, Deepak Hooda also returned to the pavilion after scoring 4 runs in just 2 balls.

Seeing Surya Kumar’s batting, it seemed that he had landed straight after the last match. Surya Kumar didn’t spare any Sri Lankan bowlers today and hit shots all over the ground.

Surya Kumar Yadav completed his half-century in just 26 balls. But Surya Kumar was not stopping and was raining fours and sixes all over the ground. He was constantly targeting the bowlers.

Surya Kumar Yadav completed his century in just 45 balls. He scored 112 runs in his innings which included 9 sixes and 7 fours.

Axar Patel, who came on the field in the last moments of the match, also showed good hands. He scored 21 runs in just 9 balls with the help of 4 fours.

In front of the Sri Lankan team, a huge score of 229 runs was scored.

All the bowlers from Sri Lanka proved to be expensive. For Sri Lanka, Madhu Shankar took 2 wickets while Rajita Karunaratne and Hansaranga got one wicket each.

Sri Lanka’s chase of a huge target of 230 didn’t get off to a great start.

In the very first over of the match, Hardik Pandya’s ball hit the Pathum Nissanka’s pad and under the pressure of a loud appeal, the umpire gave him out. But declared not out by the third umpire

Kusal Mendis was dismissed after scoring 26 runs in 15 balls with the help of two fours and two sixes.

Arshdeep Singh got the second wicket for India. Pathum Nishanka caught by Shivam Mavi off the bowling of Arshdeep.

Sri Lanka’s third wicket fell in the form of Avishka Fernando, Hardik Pandya caught him by Arshdeep and at this time Sri Lanka’s score was 51 for three in 6.1 overs.

After this, there was a 33-run partnership between Dhananjay de Silva and Asalanka and Sri Lanka’s fourth wicket fell in the form of Asalanka.

For the fifth wicket, Dhananjay and Hasaranga added some runs but Dhananjay was also dismissed for 22 runs at the score of 96 runs.

Captain Dasun Shanaka, who came in after Dhananjay’s dismissal, scored the maximum 23 runs.

After this, Sri Lankan wickets kept falling at regular intervals and in 16.1 overs, the entire Sri Lankan team was all out for 137 runs.

Today all the bowlers performed well for India and except Shivam Mavi everyone got wickets.

India won the third T20 match and won the three match T20 series by 2–1. Before that, India won the first match in Mumbai and Sri Lanka won the second match in Pune to draw the series 1–1.