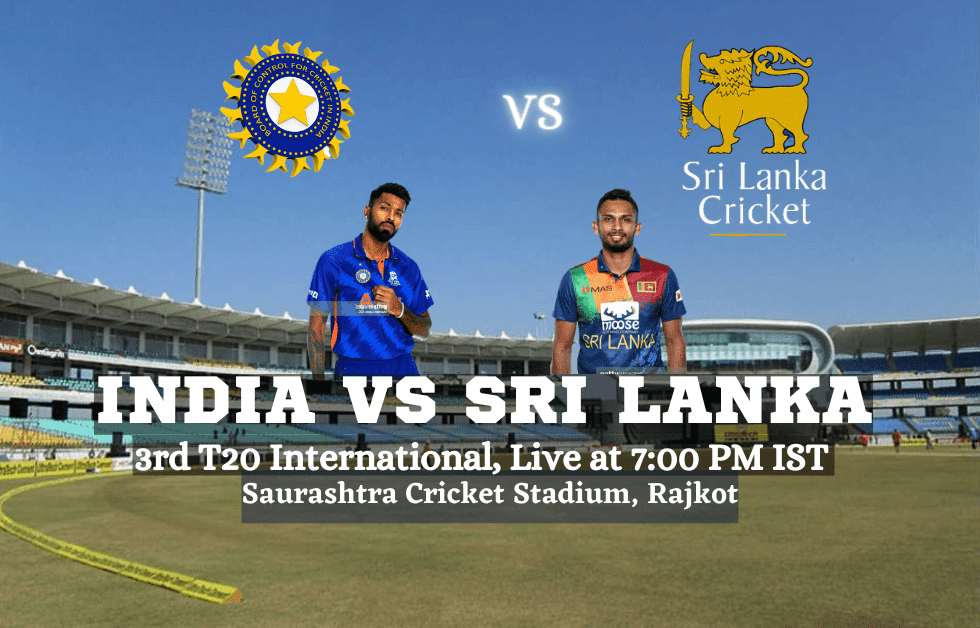 IND VS SL 3rd T20: The 3rd and final T20 match between India and Sri Lanka will be played at the Saurashtra Cricket Stadium in Rajkot today.

Team India reached the Saurashtra Cricket Stadium in Rajkot yesterday to play the last match of the T20 series against Sri Lanka.

A warm and traditional welcome in Rajkot as #TeamIndia arrive for the third and final T20I, which will take place tomorrow! 💪🏾 #INDvSL pic.twitter.com/6Z7IOGO0BS

And the way the Indian team is performing in T20 matches, it seems that it does not require more than two or three senior players.

Significantly, the Indian team won the first match by 2 runs with a lot of struggle and lost the second match by 16 runs.

But the Indian team led by Hardik Pandya is fighting very well, which has been praised by the legends of Indian cricket.

Indian coach Rahul Dravid has come out in favor of the young cricketer saying that international cricket is not easy. We have to trust our players, so give them more chance.

The Indian team will have to dominate Sri Lanka from the very beginning. The opening batsmen will have to give good starts to build pace in the middle overs.

Shubhman Gill has not been able to play a long innings in a single match so far. His score was 7 and 5 runs in both the matches respectively, which is not the right score for an opening batsman in any sense.

You must be aware that in the second T20, Sri Lanka scored a huge score against India, in which the poor bowling of the Indian bowlers was responsible.

Arshdeep Singh, who returns in the second T20 match, will have to improve his bowling, especially focus on his runner.

Let us tell you that Arshdeep Singh, who returned in the second T20 match after fever, looted a lot of runs with his bowling, Arshdeep Singh gave 37 runs in his 2 overs in which he bowled 5 no balls.

Shivam Mavi has been given a chance in T20 series and he is expected to improve his game so that topped a strong team like Sri Lanka on a low score.

Shivam Mavi, who made his debut in the first T20 match, did badly in the second match, conceding runs in his four overs.

Looking at the changes in the team, Rituraj Gaikwad is in the waiting list as the opening batsman and there are high chances that he will be playing in place of Shubman Gill in the third T20I.

The Predict 11 team of the Indian team is as follows –

Given the performance of Chowk in the opening two matches of the Sri Lankan team, there is little chance of a change.

The Predict 11 team of Sri Lanka team is as follows –

India and Sri Lanka are currently tied at 1-1 in the series after winning one match each. So this last match will decide which team wins the series.